"On Iwo Jima, uncommon valor was a common virtue."

Presenting a stunning presentation from the highly-anticipated book by the same name. Available for your team or event. Available also to government organizations as Professional Military Education (PME). 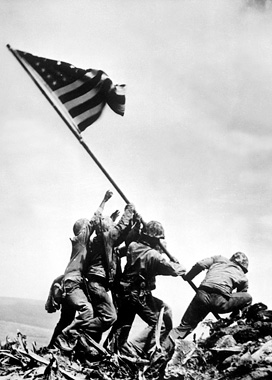 Lest it be lost with the passing of a generation.

It was the 1945 battle that horrified the nation, and the scene of the photograph that inspired it. For the Marine Corps it was the supreme test of its capabilities, its doctrine, and its culture. For the boys who encountered it first-hand, it was a nightmare.

The tip of the spear for the Marine Corps during WWII was the rifle company. It fielded 162 of them in the Pacific. 72 of them fought on Iwo Jima. For the first time ever, walk step by step with them, gain experience with them, and find out what mattered most to them individually, and as a team. Learn why Iwo Jima veterans referred to themselves as Iwo Jima survivors.

END_OF_DOCUMENT_TOKEN_TO_BE_REPLACED

Use this presentation individually as an on-site leadership and team experience, or apply it as the foundation on which to build your Trident team/leadership development program. And we'll advance as far with you as you'll let us. But whether you choose a single leadership event, or push forward with an on-going partnership with TeamTrident, we endeavor to move you through the Boyd Decision Cycle from Observation to Action...

Use this presentation on-site or explore hallowed ground with us and experience Leadership and Team as few have, the good, bad, and ugly. But the Trident experience doesn't stop there. On some of our programs, experience it in real-time with our carefully selected hospitality partners.