My Years with the Veterans

Premeditated Hindsight: this photograph made the book possible.

As one who has been privileged to spend a good bit of time with combat veterans over the years, especially World War II veterans, and to have actually been voted an honorary member of a WWII Marine rifle company, 2-F-23, I have spent a lot of time over the years asking questions...and watching for scenes like the one in this photograph -- one of the more powerful ones in the 2-F-23 albums. It spurs many memories...and emotions.

The photo below captures one of those moments for a young historian, when you had better be present, and had better have the tape recorder rolling -- not so much because something profound was suddenly going to emerge, though it just might. It's the mix of characters at the table, fully engaged in sorting some things out. You absolutely must be there when it happens. It may never again.

When a small group like this forms, you've got to try to keep them together and focused as long as you can, and get all you can out of it. But, if you're paying attention (or recording it, as I was), then there will almost certainly be clues and fine details here, not to mention expertise. If you can stoke the fire.

I adopted the rather passive stance of making myself available, and being in the right place at the right time, should opportunity arise or a spontaneous group discussion begin. I avoided pursuing those few who preferred not to stir up memories. That's not why they were at their reunions.

I would spend as much time as possible in the hospitality room, and sometimes be there all alone, but not for long. You never knew when somebody was going to show up and this scene would play out. The last thing you want is to walk in and discover that you've missed it. Especially when you have, as in this case, the very tip of the spear of the rifle company gathered around a table.

In this photograph, left to right, are Jack Simms, Don Swindle, John Gardner, and Sam Haddad, who was really the legend in the company. This is a good group which is sure to net some intriguing perspectives, because these guys all have direct history with each other on the battlefield. This is gold. And they are in "study mode." 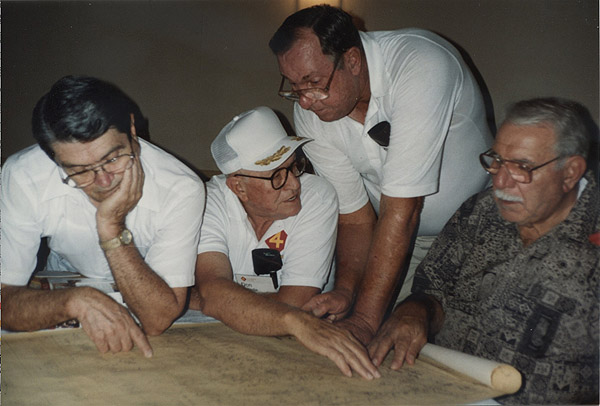 
You've got to get Gardner to have a seat, otherwise he'll be there maybe five minutes at most. Simms was at Iwo Jima only, whereas the other three were salty veterans of the three earlier operations. So you'll have to hang on and keep up. One moment, you will be discussing a scenario on Iwo Jima and then comes the oft-used phrase, "see, that's like when...", and suddenly you'll be atop the cliff on Saipan, then dug in alongside the road on Tinian. So you've got to know your stuff to keep up.

Getting guys one-on-one is good, but it is in these small sessions that you can triangulate and find the converging accounts of mysterious events — because very little in the published histories provided context for them. The guys will remind each other of events that would not emerge naturally in a one-on-one setting. Think about it. They didn't fight or train alone, they fought together. Well, they can also remember together. It is also then that you can "feel" the team's pulse. And for me, that is critical.

In this case, Simms will probably stay for a half-hour, possibly longer if it gets good, Gardner only a few minutes unless you get him to sit down. (This happened in 1996 and it was a significant miss on my part.) But this session may last for 2 or 3 hours. And you'll have a few other guys pass by and throw in a story or recollection as they’re on their way to the bar or to play golf.

I recall that, nearly 25 years ago, I tried to use what I called "pre-meditated hindsight." It meant looking into the future and anticipating any question that could arise, and asking it while the veterans were around to answer it. And boy am I glad, all these years later, that I did. Fortunately, the Marines had plenty of patience and enthusiasm. They still do, and I still ask everything I can think of while I can.

Well, the scene in this photo is why the book was possible. It is, to my eye, very powerful. It stirs all sorts of emotions, not the least of which is excitement...that sense of, "oh boy, this is going to be good." I do miss my friends in this photo. And I treasure the memories.

The full story of their WWII rifle company Company has been written by Trident founder, Steven McCloud. Two decades and hundreds of interviews with the Marine veterans of that World War II rifle company, paired with forensic-level research had produced a journey across the Central Pacific with the Marines as never seen before.

The manuscript is now with a publisher, awaiting the word to go. Visit the website.