Tell it to the Marines

With the Marines: "Working as One"

Twentynine Palms, California is home to the Marine Corps Air Ground Combat Training Center, and the location for the Corps' ITX, Integrated Training Exercises. Trident founder Steve McCloud made multiple trips to California in 2017 to deliver PME (Professional Military Education) to two battalions of Marines as part of ITX 4-17. Since the focus of integration is working as one, McCloud took the Marines back to Iwo Jima virtually, to rediscover why that 1945 battle stands at the pinnacle of Marine Corps legacy.

"You may have heard it said that the Marines who fought on Iwo Jima were on the island while the Japanese were inside it. And that's true," says McCloud. "But if we are to more fully comprehend the experience of that struggle, I think it is more accurate for us to recognize that the Japanese defenders and the island itself were as one. Together they shredded Marine units apart, stripped away much of their material advantage, trapped them in terrible terrain, isolated them from their fellow Marines, and bled them dry. In fact, those 23,000 Japanese defenders -- working as one with that island -- inflicted 26,000 casualties on the Americans. And that's the only time during the war that the Marines suffered more casualties than they inflicted."

"Well, they don't need me. But the Marines seek opportunities to continuously improve, and to refresh and refine what they do, and to sharpen the tip of that spear. And that's something we see in high-performance teams -- and good leaders, for that matter."

"What the Japanese and that island could not break, however, was the resolve of the individual Marines to get back together and fight as one, and fight to win as one. The enemy could never break that resolve, combined with the grit to put one foot in front of the other, again and again. And that includes functionally diverse units like engineers and tanks and riflemen struggling daily to work together. It's what they had trained for, it's what mattered most to them, and it's what they strove for day after day until they won. It's what made the difference in that battle, and it is for that reason that Iwo Jima became what it is to the Marine Corps, back in 1945, and today. It was the ultimate test of the things that matter most, and the Marines showed that they were up to the challenge."

Asked why the Marines need him, McCloud has a direct answer. "Well, they don't need me. But the Marines seek opportunities to continuously improve, and to refresh and refine what they do, and to sharpen the tip of that spear. And that's something we see in high-performance teams -- and good leaders, for that matter."

"When you do what we do at Trident for enough years, you begin to recognize that those who probably need leadership and team help the most are the least likely to do it. They'll find any excuse not to because that's what they do every day, it's how they run their business, and it's what their customers experience. Meanwhile, those who probably need it the least tend to be the ones most likely to seek it out...which is why they need it the least. They never stop. They don't seek a one-off fix, they keep at it. It's a completely different mindset. In fact, that's what we call the Leadership Mindset. Team and Leadership development is not a thing that they take time out to do; it's who they are. So they seek out opportunities to enhance what they're doing. Well, we bring something to that fight, and I think they recognized that. But it's a humbling experience -- a great honor to deliver what those combat veterans of Iwo Jima want these fine Marines of today to know. It's an honor just to show up."

McCloud leveraged his two decades spent with the combat veterans of Iwo Jima, and the extensive research done for an forthcoming book on a Marine rifle company in the Central Pacific. 2-F-23Marines.com.

The appearance of U.S. Department of Defense (DoD) visual information does not imply or constitute DoD endorsement. 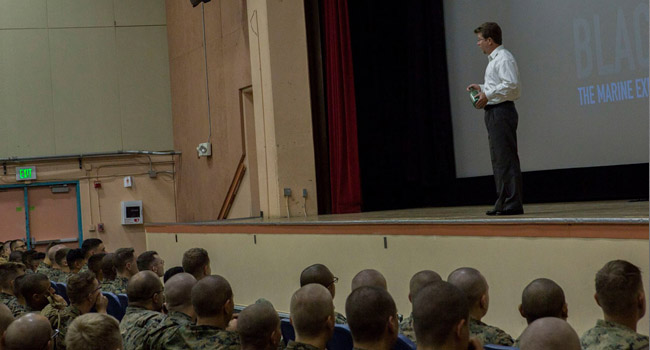